Before Krithika Muthukumar joined Stripe in October 2013, her experience ran the gamut from consumer marketing to frontend development.

“My background is a bit unique,” she says. "I went to school for business, but also majored in Cognitive Science. I also took quite a few Computer Science courses and was always coding on the side.”

That side hobby became a career when she decided to join Google as a frontend engineer after graduating. “I optimized for the company I was most excited about,” says Krithika. “The job started with building landing pages for Google Search features, but I was soon pitching ideas for revamping other marketing websites and creating new ones. Eventually, I realized I cared as much about what was on the page as how it was built, so I switched into product marketing for the Android platform, helping launch the Nexus hardware line, and driving the messaging for all major Android releases, as well as developer.android.com."

After her formal transition to Product Marketing, she decided to expand her skills as marketer #3 at Dropbox. “I was able to write and refine my own playbook at Dropbox,” she says. “I continued marketing to consumers, but I also had the opportunity to launch Dropbox Business and the Dropbox platform to open new lines of revenue for the company.”

Then Stripe came along. She adds, “I wasn’t necessarily passionate about finance or payments, but I talked to the team anyway. Their mission—to grow the GDP of the internet—made me feel like they wouldn’t be just payments for long. And everyone I spoke to felt like they were ten steps ahead of me. I knew I’d learn something along the way.”

When she joined, her marketing skills were instantly put to the test. She was the first marketer when she joined a 60-person team that was already serving over 100K developers, had big plans for international expansion, and was finalizing an $80M Series C.

In this interview, Krithika reflects on the need to ship fast and often, building positioning and marketing pipes as a solo marketer, and how building iterative and customer-obsessed processes were critical for Stripe’s early momentum.

Shipping in the first 48 hours

When she started, Krithika reported directly to the CEO, Patrick Collison. She recalls, “I had my first meeting with him at the end of my first day, and expected we’d talk about his hopes and visions for Stripe’s marketing.”

However, what she actually got was quite different. “The moment I walked in, he asked me if I had my Stripe GitHub account yet. When I said ‘no,’ he set me up very quickly. He then proceeded to tell me about their work on building a new website,” she says. “And he asked if I could write all the copy because they wanted to launch it in about 48 hours.”

So she got it done, and within 48 hours they shipped an updated website. Krithika explains, “It was definitely an exercise of jumping into the deep end—learning all the details about the product and features and what our customers cared most about—but it also reflects a major theme in my first chapter at Stripe: we just had to execute, and fast. Because of the competitiveness of the market, we couldn’t wait 6 months or anything like that.”

From there, she—like all other Stripes at the time—did a rotation with the Support team. After answering support tickets for a few days, she started to notice quick content opportunities. “People were asking pretty basic questions,” she says. “Like whether we offer subscriptions. Or support paying out to other people. And I thought, of course we do, but there’s no reason you should know that because we don’t tell you anywhere on our website.”

At this time, Stripe’s surface area was mostly limited to their website and documentation. And there was a lot of missing public content about their products. She adds, “My first few months, I created a stack-ranked list of content that needed to be put out into the world, and then methodically burned that list down. We started to fill the voids of content.”

At the same time, Krithika wanted to establish better product marketing at Stripe. “I wanted to build a discipline of great launches, so it was a journey of helping engineers to expand their thinking on what launching products meant and the channels we could use to talk to users. Think blog, email, etc.,” she says.

One of the first product launches she worked on at Stripe was a feature to accept multiple currencies—139 currencies to be specific.

"One of our senior engineers, Thairu, had been working on it for months and it was looking great. Before I joined Stripe, our engineers would write blog posts about the features they shipped whenever they remembered to—sometimes well after the feature had launched to customers,” she says.

Partnering closely with their Head of Comms, Kelly Sims, who had already put a narrative in place for the press, Krithika dove in to figure out how best to position the new feature to their customers.

“The alternatives sounded horrible. You had to set up multiple different bank accounts. You had to set up processing accounts. Build logic to figure out how to route each transaction. Manage API keys and collect locations from users. It puts a lot of onus on the business and not the payments platform,” she says.

Krithika adds, “Understanding the customer pain points really amped up our urgency and built conviction in the launch. They also helped us sharpen the messaging and positioning.” In the end, the team launched the update in February 2014, with great reception from their growing developer audience. 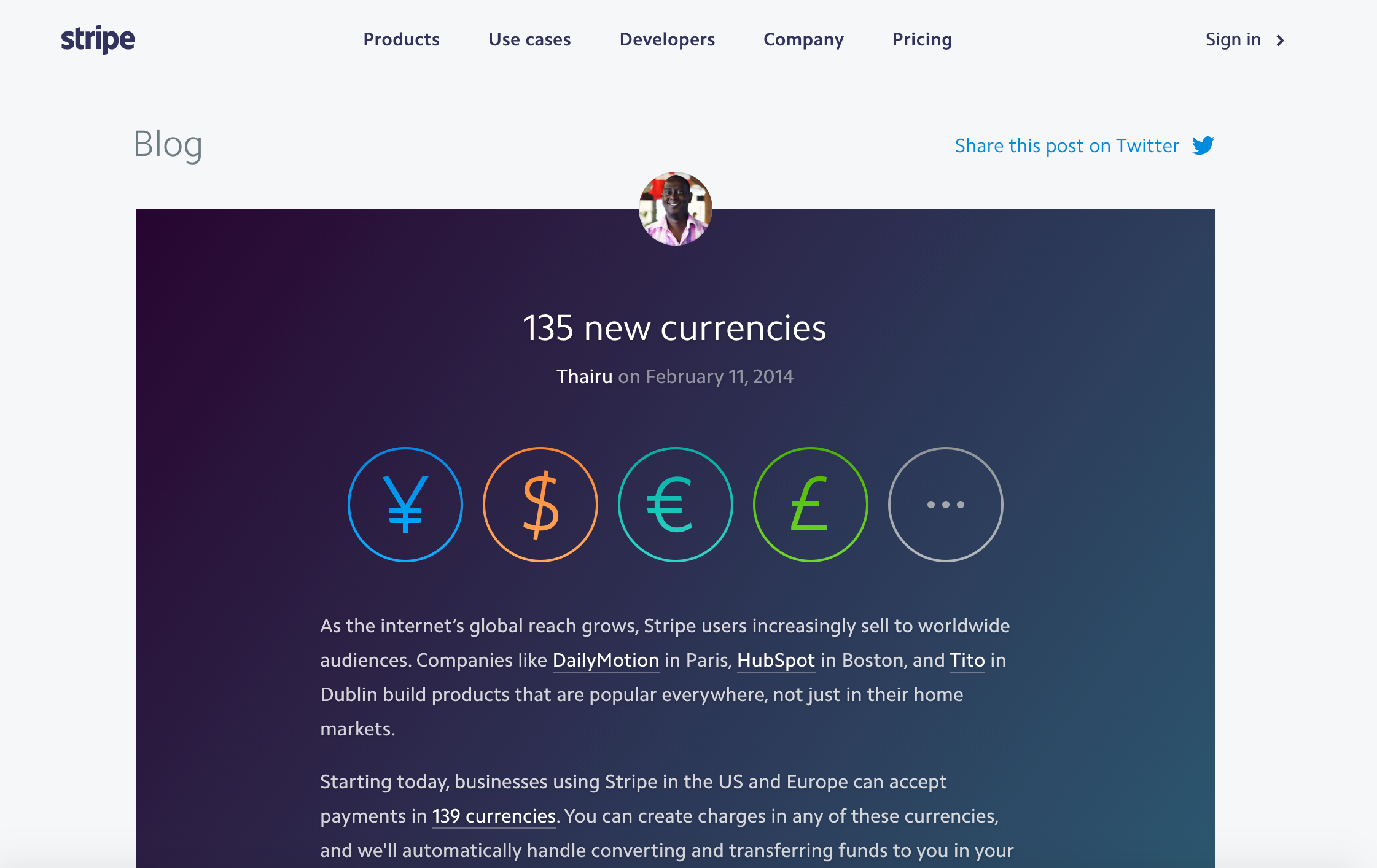 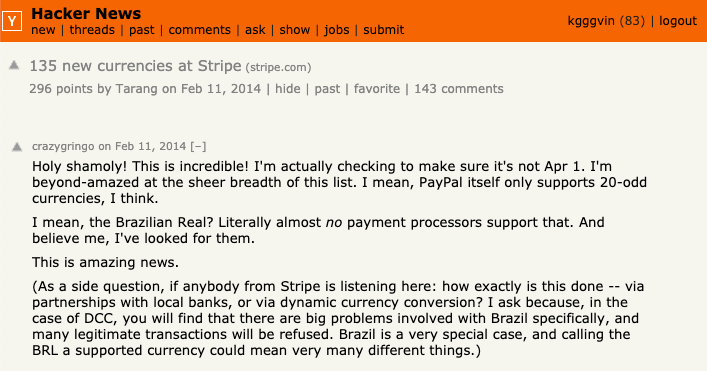 “Even before this launch, the team had very strong intuition and gut instinct about developers. But this was one of the first times we thought through a launch from start to finish from a marketing and go-to-market perspective,” she says. “We put out a coordinated release across the blog, website, email, the Stripe Dashboard, and social media. We expanded the definition of what a launch meant at Stripe.”

Krithika spent her first 3 years at Stripe as the only marketer at the company. And while a lot of her energy was spent on product marketing, she was also responsible for the early pipes and demand engine at Stripe.

She reflects, “In retrospect, I could have improved our marketing systems much earlier on—especially in having a single source of truth for customer data and buying purpose-built tools when needed. Because I was technical—and most of the team was technical—I defaulted to getting into the code to solve everything.” This decision had a lasting impact, as even up to last year, every single copy change on stripe.com required a code push.

Krithika adds, “we didn’t think proactively enough about our marketing systems, so it ended up looking just like the production engineering systems that we were used to on the product side. Everything required hacking around at the time. For emails, I’d go into our database, run SQL queries to pull lists of customers, manually upload CSVs, and queue up emails every time. Of course, very quickly, we put a lot of stringent data security and access controls in place. My advice now would be to get a strong system in place as early as possible to help your team as you scale. Think beyond your own skill sets to what others on the team may need to be effective.”

While marketing operations were mostly reactive, the opposite was true for metrics reporting. “We might not have done it intentionally, but we were always very focused on measuring marketing pretty deep into the funnel,” she says.

Krithika adds, “on the acquisition side, we would measure our impact all the way to sales qualified opportunities, even though the efforts might not always be directly attributable to marketing. On the product side, we’d avoid vanity metrics like page views and try to understand if the right people were using and engaging with the product and how many were coming back.” She also acknowledges that while this was much harder to measure, “it aligned our incentives well to what was useful to the company.”

Today, Krithika leads a team focused on startups and the self-serve experience for Stripe. When asked more candidly about what has made Stripe a $95B business, she argues it’s all about editing the company and the focus on putting users first.

“At various points in our history, Stripe has stopped to see if our processes and operations were still serving us well,” she says. “We’ve used retrospectives, biannual surveys called StripeSat, and more to identify what slows each of us down, and then meticulously studied that data to remove friction. Stripe was and continues to be an organization in progress.”

When it comes to customers, she feels that more conversation has led to more clarity. “We built into the DNA of the company that we talk to our customers every week, every day, trying to understand where they’re headed, what their goals are, and where the friction is.” Krithika adds, “and from there, we rub down that friction and sand the edges of the experience until it’s better. You need your customers to help define the market problem with you, or else you might end up solving something they never really cared about.”

And, even as the company’s aperture has grown far wider than developers and now serves enterprises like Amazon, Atlassian, and Salesforce, Krithika still holds a soft spot for marketing to startup founders and developers.

She adds, “If you’re a storyteller, developer and startup marketing is a fantastic place to experience the true essence of marketing. You don’t get the crutches of frilly, shiny campaigns and slogans. The only way to stand out from the pack is to distill your messaging and marketing to the core essence of the value and differentiation—and let the product experience do the rest.”