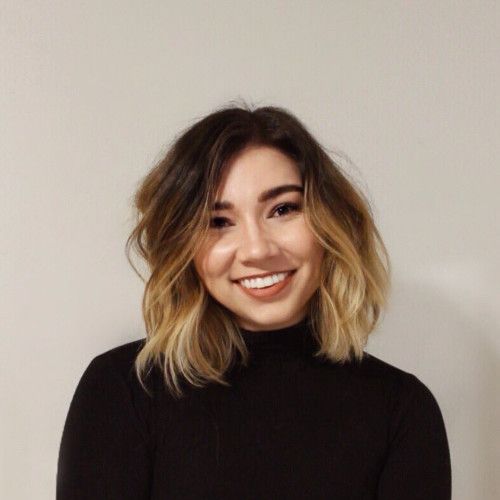 Since switching to Retool four years ago, LeadGenius has saved over $1 million through efficiency gains achieved with apps built in Retool. How did they do it? They were able to leverage the skills of nontechnical employees to build the data analytics and management tools they desperately needed with Retool.

LeadGenius is a company that finds and personalizes lead data for B2B companies through a combination of proprietary blend of technology automation and human researchers. Because of the “human researcher” component of the business, it’s important that the team at LeadGenius have easily-accessible tools and reports that are customizable, editable, and maintained in real time.

In 2020, we caught up with Adam Louie, Senior Director of Business Operations at LeadGenius, to talk about the data visibility challenges the company faced and how Retool empowered Adam and his team to build useful tools to add visibility into that data with very little engineering overhead.

Two years later, we followed up with Stefan Cvrkotic, Implementation Manager at LeadGenius, to learn how their use of Retool had evolved since our initial chat. In this post, we'll deep dive into several applications the team has built to help LeadGenius reduce costs and improve customer experience.

With any fast-growing company, it’s inevitable that processes and teams will quickly evolve. And in an ideal scenario, their data management practices, and the tools that support them, evolve alongside them.

Unfortunately, this wasn’t exactly the case for LeadGenius.

As the company grew, data was siloed into their product database and a Salesforce (SFDC) account that only a few engineers in the company could access. This setup worked in the early days as engineers and analysts could easily fulfill data analysis requests without much hassle.

However, as LeadGenius scaled, cleaning data for deeper analysis and use became a complicated task that took hours from engineers every week.

On top of this choke point, the business operations team was stuck using a manual process for analysis done on data from the product database. The drawn-out process meant that any useful findings were discovered days late, and helpful patterns were sometimes missed completely.

It was a legacy-induced headache no matter which way you sliced it.

So, rather than continue to struggle against the confines of outdated data processes, LeadGenius decided to reinvent their approach to data management and accessibility.

To start, Adam began uncovering exactly where the company had outgrown its original data management practices. He soon discovered that LeadGenius would need a suite of internal tools that allowed team members to see their data in real time. However, he didn’t want to overburden engineers with a bunch of build requests.

So, he turned to Retool.

Project Windshield was LeadGenius’s initiative for building business intelligence tools that helped nontechnical workers see into the data they previously couldn’t. The name was derived from the fact that LeadGenius had “a really great rear-view mirror, but we can't see out of our windshield." In other words, their current setup gave visibility into past insights a bit but didn't give them real-time updates or a chance to project into the future. That had to change.

Adam looked at a couple of different options for building BI tools, including Tableau, Chartio, and a homegrown solution. Ultimately, he went with Retool because it was easy for nontechnical people to use and had the ability to read and write data from the back end (many BI tool apps are read-only). In other words, Retool not only opened visibility into business performance, but it also gave Adam and his team the ability to act on it -- all in one platform.

We’re going to look at three internal apps that Adam created with Retool during Project Windshield to solve the visibility problem:

User Profiles: An app for structuring and maintaining customer accounts

Adam’s first project was a simple app that would allow him to do cleanup work on the customer data LeadGenius kept. Their database structure wasn’t doing them any favors. It lacked database hygiene and the functionality to connect the dots between all of their databases. In short, the old set up was plagued by limited information that made it difficult for LeadGenius to see the big picture.

Before LeadGenius tapped Retool, this work had to be done by an engineer. Not only would they often drag their feet to finish the work because they were so busy working on the product, but their changes also had to go through the slow process of code reviews. That meant Adam would have to ask an engineer to update even the most menial of database hygiene tasks, which would often take weeks to complete. The process was too slow.

Clicking on a row shows a more detailed view and allows the admin to input or update information for each profile, such as SFDC Record IDs used to cross reference data from their product and CRM.

In the end, cleaning data became a much simpler task that could be done by anyone with administrative permissions, rather than a back-end engineer alone.

The second tool that Adam built for LeadGenius was one that really catered to business operations: a cost-analysis tool.

The people-side of LeadGenius that works in tandem with automation to provide B2B data is made up of a global team of around 300 contractors. These contracts are paid hourly and have timesheets that are stored in the product database.

The business ops team had a few problems: 1) They needed to have a way to easily track costs accrued by contracts over time and 2) spikes in costs and discrepancies were difficult to identify.

Before Retool, two LeadGenius employees were tasked with manually gathering data from the time sheets and generating a report on community costs in a spreadsheet. This tedious work generally took five days to complete, meaning no data on costs was reported until five days after payouts were made. "This was not only a waste of time," Adam says, " but it was also hurting us because we were waiting until five days after the month ended to get any answers."

Adam’s solution was to create an app that analyzed the time sheets in real time and used graphs and charts to form a dashboard for quick feedback. This tool allowed users to track revenue, COGS, and more. It enabled LeadGenius to see spikes and costs in real time, show where the costs were coming from, and validate them.

Adam says it was a game changer: “I attribute a lot of the success that we had to Retool, because we literally improved our gross margins by 30% to date."

Now that Adam has more experience in Retool, he’s building a 2.0 version of the dashboard with Retool’s more sophisticated graphing components. Here’s a sneak peek: 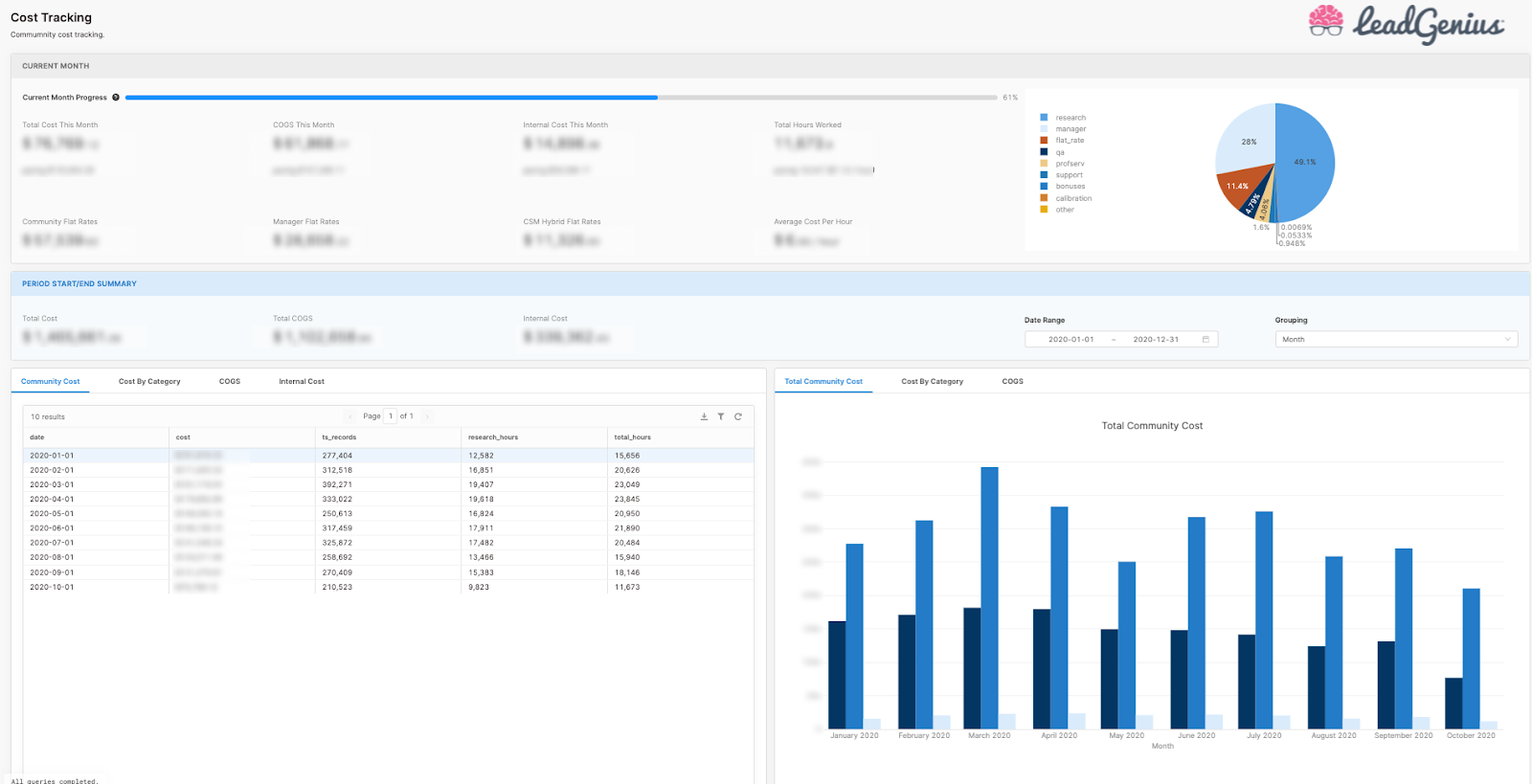 LeadGenius’s product management dashboard is potentially the most useful of all the apps. This is because it’s the only centralized view and source of truth of data at LeadGenius for users working outside of SFDC who still need visibility into the information stored there.

Customers of LeadGenius submit data requests called “data campaigns,” which establish the scope of the custom data they want LeadGenius to find. Project managers are in charge of these campaigns and generally have two resources: 1) Automation scripts and 2) human researchers used for manual QA and validation.

Previously, most of the work was organized and performed on spreadsheets. This was acceptable during earlier stages of the business, but led to difficulties as the company scaled.

Even though this information was created and saved within their product, LeadGenius needed a more efficient way of surfacing data to the stakeholders involved in facilitating data requests. Retool was essential in establishing a centralized source of truth to make this possible.

The tool Adam created allows project managers to get an overview of all campaigns they are working on, organized by stages. It’s similar to a sales rep’s opportunity funnel in SFDC where stage one is in review, stage two is awaiting approval, stage three is launched, and so on. 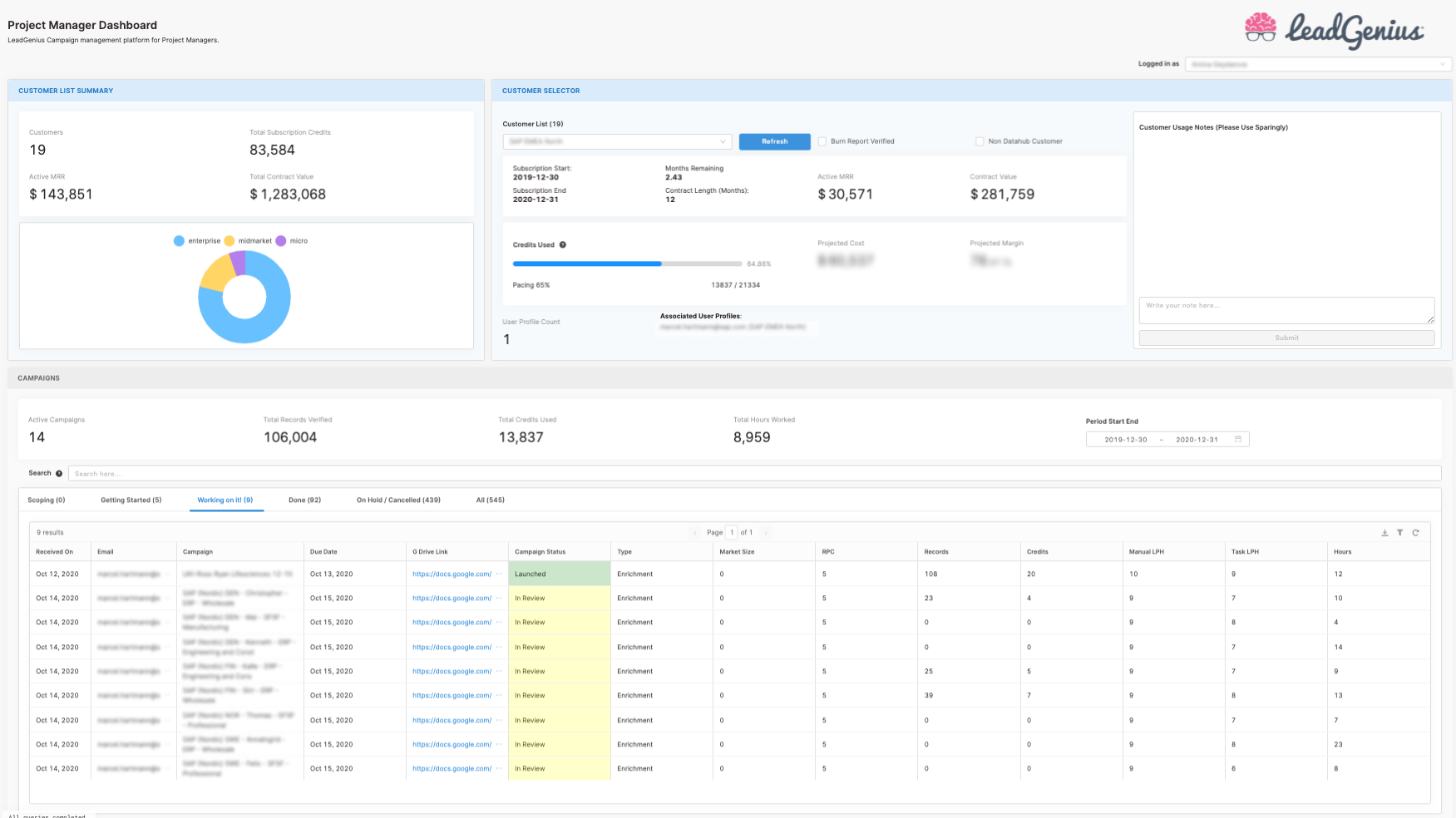 Clicking on a campaign shows the details and project managers can easily update fields as necessary directly in the app.

This tool has allowed employees to work cross-functionally with each other and have access to all of the same data so they don’t have to waste time relaying information.

The apps that Adam created with Retool helped the company operate more efficiently and scale. The user-profile app helped clean up the database by making data categorization easy. The community-costs app helped business operationalists identify discrepancies, and manage gross margins in real time. The Project Management Dashboard helped project managers have one central source of truth for managing customer data campaigns within their own CRM, all while being connected to a myriad of databases

All of these apps were created by someone with no formal engineering training, just the “fantastic support of the Retool team” (Adam’s words) and limited knowledge of SQL.

“Retool is a tool that enables me to perform the tasks that previously required a full-stack engineer,” Adam says.

In fact, Adam thinks that each of the tools he’s built would take an engineer at least two months (or more) to complete from scratch. With Retool, a nontechnical person was able to create the same tools in less than a month.

Since the beta launch of Retool Workflows, Stefan has started to find dozens of places where LeadGenius could reduce the manual effort as they scaled.

LeadGenius had already helped project managers manage customer data campaigns, but there was a lot of low hanging fruit in automating the daily, manual tasks and scripts that the team used to manage their large community of contractors. Using Retool Workflows, Stefan has been able to build several automations—directly in Retool—to win back time for the team.

For example, he's built workflows to:

He adds, "Before Retool, we didn’t have a way to pull the necessary data quickly, easily, and reliably enough to make automated bonus payouts possible or repeatable. With Retool Workflows, I've been able to define a custom way to build this incredibly fast—and I can update it with very little work as we expand the criteria for how we pay bonuses.”

In this tutorial, you'll build a tool to manage HubSpot leads using Retool. The app will allow your sales team to enrich and qualify new leads all in one place.

ShareChat needed to create an efficient process for building internal tools to keep up with its rapid growth. The end result: ShareChat builds tools and operates faster, all while reducing engineering expenses by 20%.