Retool's CEO on the operations behind winning early sales deals

Running out of runway

A few weeks before Y Combinator Demo Day for the Winter 2017 class, David Hsu was burning around $1000 a day while trying to build a UK-based Venmo competitor.

“Fintech was a challenging business. We were processing payments for other people and losing money for every payment processed. It was a pretty dire situation," recalls David. With less than 60 days of runway left, they decided to pivot. Scouring for ideas hidden in their prior work, they uncovered a hefty list of custom software they had built trying to keep their fintech startup running.

And after building all of these tools themselves, David noticed a pattern. “When you build enough internal tools as an engineer, you realize that all internal tools basically look the same. It’s just a bunch of tables, buttons, drop downs and forms that you have to build from scratch. What if there was a drag and drop way of building this faster?” says David.

Within a few days, they had a functional prototype. A few weeks later, they presented at Demo Day 2017 and announced they had already signed an enterprise customer pilot worth $1.5M.

In this interview, David breaks down how Retool used outbound sales to hit product market fit. He is joined by one of Retool’s first associate sales engineers, Devon Groff, to discuss scaling the business with inbound sales, and changing how their market thinks about internal tools.

“I would divide sales at Retool into several stages. The first stage was mostly outbound because no one knew about Retool,” says David. “The only way that you could learn about Retool was for me to email you and tell you about it.”

For their first year and a half, Retool relied almost exclusively on outbound. Here’s a look at their first outbound campaign: 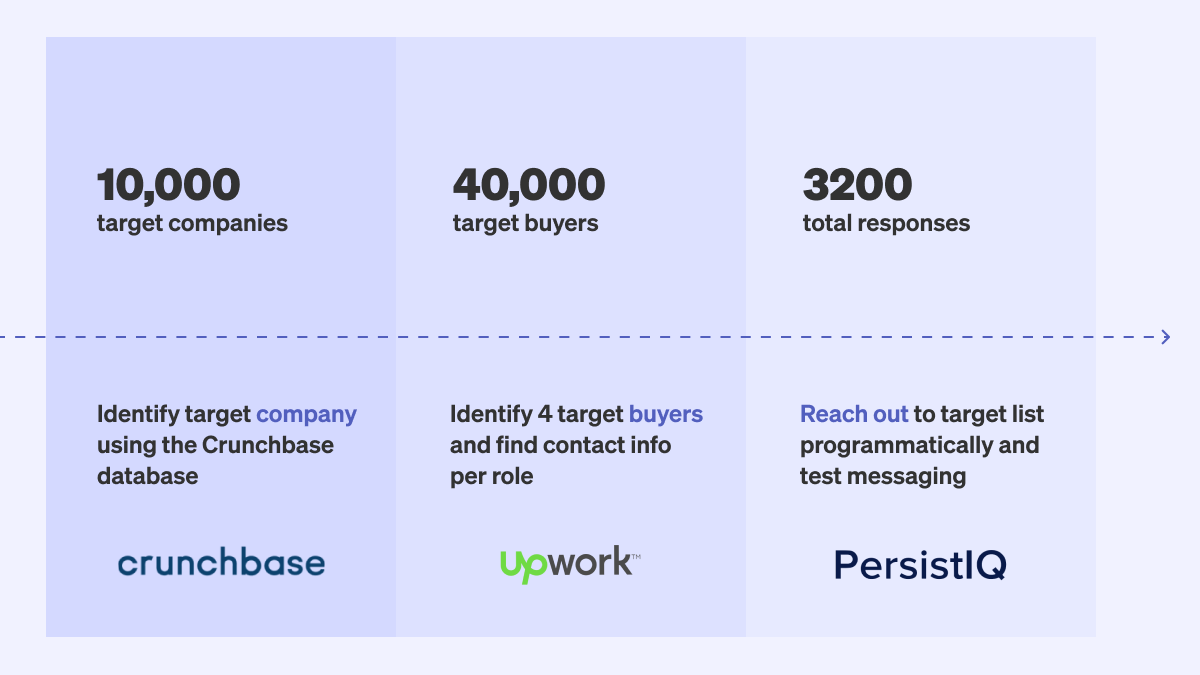 The first step was to sign up for Crunchbase Pro and find the right companies to go after. Initially, they had set their eyes on mid-stage startups, so they applied the following filters to the Crunchbase database:

“Typically, if a company has raised money in the past 6 months, it means that they are looking to expand, grow, and operationalize what’s already been working,” says David.

Their filters produced roughly 10,000 target companies. From there, the Retool co-founders needed to turn those target companies into individual leads they could reach out to.

There were four key personas that Retool wanted to reach at every target company:

For this, David turned to Upwork. After testing with 5 freelancers, they found a really effective partner who charged about $0.10 to identify the right lead, and find their relevant contact information. “We would get a spreadsheet with 10,000 companies multiplied by 4 roles per company, for something like 40,000 rows. Our freelancer would enrich these rows. It came out to only $4000 and gave us a huge list of people to go out and target,” he says.

Their last step was actually emailing those people, which they did using a sales automation tool called PersistIQ. “We A/B tested a bunch of email copy. We tested different subject lines. We really iterated quite a bit on the messaging and eventually settled on subject lines and messaging that worked reasonably well,” says David.

In the end, they had a conversion rate of around 8% or 3200 email responses—right around the 9% SaaS benchmark. About 2%, or 800, were “don’t contact me again” style responses, but around 2400 of the prospects responded that they’d be interested to learn more. Over the next few weeks, they turned many of these folks into early adopters and were able to lock in a paid pilot right in time for Demo Day.

On August 9th, 2018—after a year of growing Retool through the outbound motion described above—David posted about Retool on Hacker News:

“From the moment we launched Retool on Hacker News, our business basically immediately shifted to inbound,” says David. “Our workflows changed substantially. We had 5, 10, 15, 20 companies signing up for Retool every day and we wanted to figure out: how can you reach out to them in a scalable way?”

The shift led to hiring an early go-to-market team, including Devon Groff, who joined as one of the first two associate sales engineers. Like many of his early GTM peers at Retool, Devon had a developer background, but no background in enterprise sales.

David shares, “We are much more interested in hiring people who are able to figure things out from first principles, rather than ‘this is how sales was done at my last company.’”

With Devon onboard, the team leaned into first principles with onboarding inbound signups. They wanted to delight every early customer—in spite of having a relatively new product and “lots of bugs.”

So they built 3 tools to ensure they could intervene at any step: 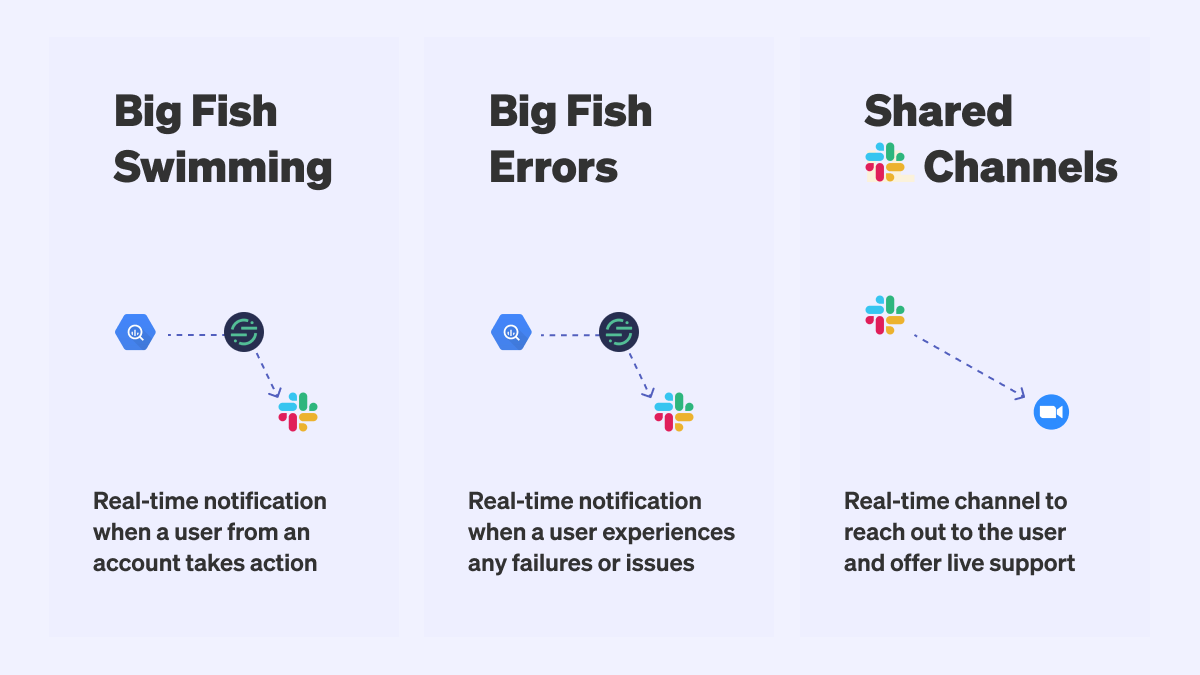 Rather than review analytics summaries at the end of the day or week, David and team wanted to see the user experience unfold for their largest early customers in real time.

“Let’s say we were running a trial with DoorDash,” says David. “We were very interested in finding out if DoorDash were actually using Retool at a given moment—let’s say 3:30 pm on Tuesday. If they are, we should go figure out what is going on because it’s actually pretty likely they are going to run into errors.”

To that end, they built an automation in Slack that ingested product data and alerted the entire company via a Slack message whenever a user from a large account was using Retool, and the actions they were taking.

David and the growing team also wanted to get ahead of any bugs or issues before a customer even had time to report it.

First, they set up analytics events that would fire when a user would hit an error message, have a query that failed or timed out, or generally ran into a major issue. Then, they’d pipe this error message into Slack so that the entire team also knew there was an issue.

All of this came together in shared Slack channels—a Slack feature that was, at the time, still in beta—which Retool had with most of their early customers.

“Let’s continue with DoorDash. You’re using Retool and you run into an error,” says David. “We already knew about it. We had been watching what you were doing already by looking at the events. So basically we could proactively reach out to you and say, ‘Hey, Chris I saw that you were trying to run a query but it timed out. Would love to hop on a call and debug why and what’s going wrong.’”

For time-strapped developers who might otherwise reject that offer, receiving the Slack message while using Retool in real time made it much likelier that they’d say yes and debug together.

David adds, “This cycle—we knew the people using it, we knew what errors they have, and we knew when/how to reach out to them—really supercharged our sales. And without this we would have probably lost something like 80% of our customers that initially came through.”

As the business and the team grew, they continued to invest in built-for-purpose tools to rethink sales activities, like building an SDR dashboard on top of Salesforce, and a simple app to remind sales reps of the healthy customers that match a prospect’s size or industry in real-time.

David is joined by Devon, who adds, “It took 30 minutes to build the first mock up. I was slacking with the team about how I just need a panel to see MQLs and write back to Salesforce. I was able to connect it to Intercom, Clearbit, and add links to LinkedIn, and by the end of the day I was basically going 10x faster.”

A more recent sales enablement tool—a mock data generator for sales demos—ultimately became one of the dozens of free developer tools Retool offers to everyone. 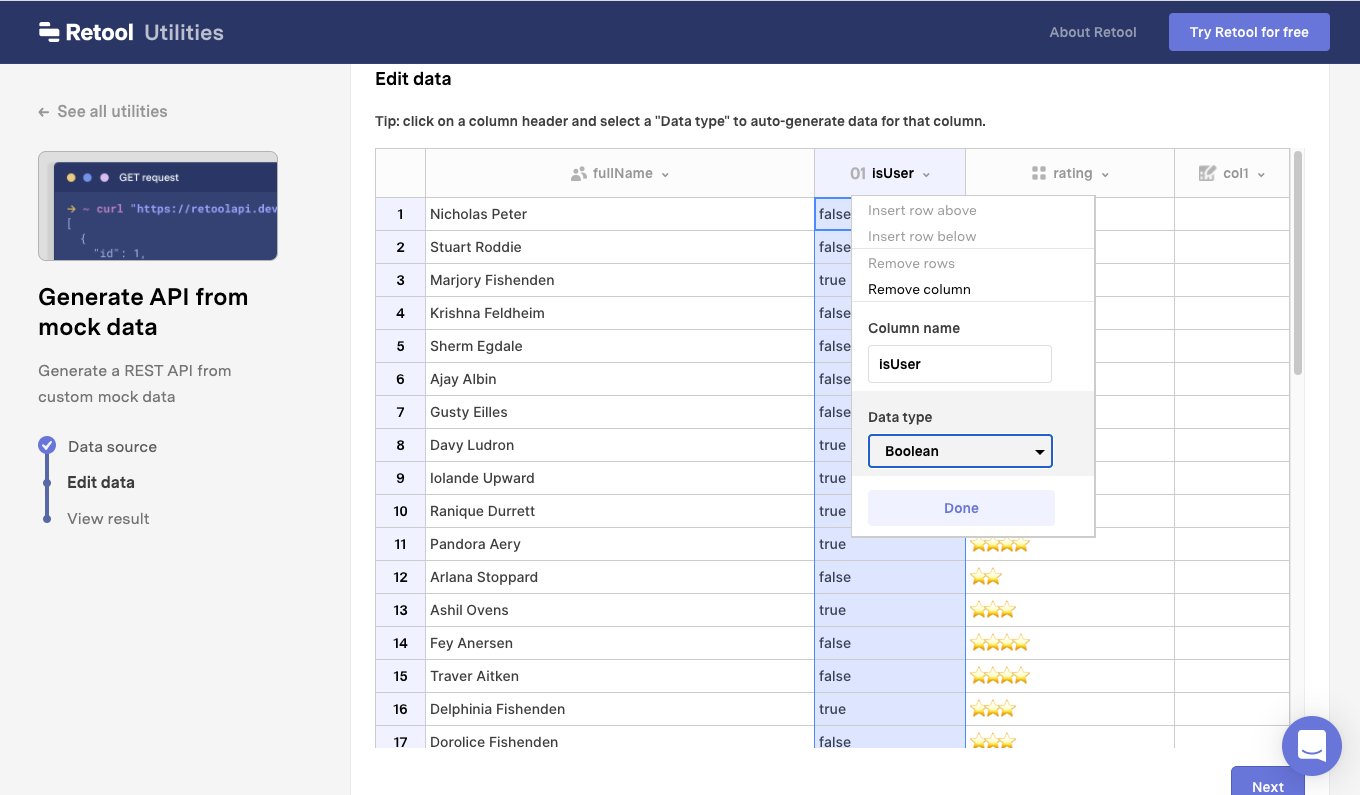 “I think [our data generator] took our ability to give customized demos a whole step up,” says Devon. “If I’m talking to someone in the healthcare industry, they don’t care about financial transaction rates. That’s not on their mind. Instead, we create custom templatized data sets and we can now put that on an API endpoint, throw that in Retool, and in a few minutes you have an app that’s built on what looks to be real data.”

But in Retool’s case, the major pivot points were actually the messaging and the market they sold to.

Remember the 2018 Hacker News post that blew up demand? Well, it was actually their second attempt at launching Retool. A year earlier, they had posted on Hacker News, but with very different messaging—"internal tools” and “low code” were nowhere to be found.

“At that point in time, we tried outbound emails with the subject line excel-like, with higher order primitives, and that, as you can probably imagine, did not receive any responses,” says David.

The early problems didn’t stop there. In an attempt to win over the legacy-tool market and audience, David went after developers who had used older tools like Claris FileMaker. “I had infiltrated a LinkedIn user group,” says David. “It was great. I now had 300-400 people that I could send emails to. So I set up an email saying that Retool is like FileMaker but for the cloud and sent that out.”

But the reply rate was incredibly low at less than 2%—and all of the replies were negative. From there, David realized he was chasing the wrong market. He adds, “The market for us was not FileMaker developers. It was actually React developers and developers who were building internal applications in general, not legacy software product users.”

Since pivoting their market and message, Retool has grown exponentially and recently raised a $50M Series B. We now have tens of thousands of customers including companies like Amazon, DoorDash, and Plaid.

When asked about the future of Retool and internal tools, David ardently proclaims there is much more opportunity to explore.

“Most companies have fairly shitty internal tools,” says David. “They’re slow, they’re kind of clunky, they make you hate your job, etc. So I think there is a real opportunity for people to actually have high quality internal tools. Let’s say your internal tools were as good as the Uber mobile app, the Lyft mobile app, or Stripe.com. I think that could really raise the efficiency of your business and make your employees a lot happier. That is something that we’re focused on a lot at Retool.”

Want to hear more? Check out our interview with David Hsu and Devon Groff here →